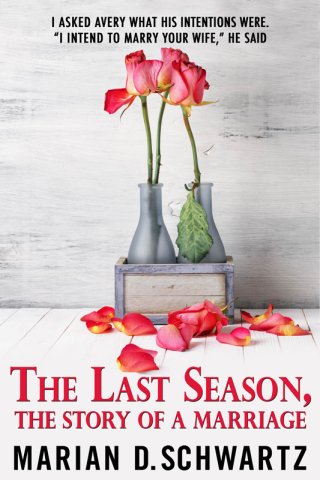 Ginger is happily married to Buddy.

Buddy and Ginger were high school sweethearts. They’ve been happily married for 27 years.

Avery Laird is divorced. When he meets Ginger, he believes he has found the perfect mate. Determined to marry her, he offers her a job at an inflated salary.

Buddy is suspicious. He thinks the job is too good to be true, and makes Ginger feel as though she isn’t worth the offer. She goes to work for Laird to prove Buddy wrong.

Ginger saves Avery a fortune in the first real estate deal she handles for his company. Flush with success, she believes the problems she and Buddy had are over.

But everything changes when they have an unexpected guest from the past. He tells Ginger the reason Buddy quit baseball after they were married, a subject they had always avoided.

When Ginger confronts Buddy with what she has learned, trouble really begins…

Buddy and Ginger each tell their side of what happened next.

“…make sure you have enough time set aside to read it from start to finish, because once you pick it up, you won’t want to put it down until the very end.”  Readers’ Favorite

“I highly recommend this to anyone who wants to experience an emotional, heart-felt read.”  Norm Hamilton, Author

Click a button below to get The Last Season, the Story of a Marriage for $4.99 on Apple, Barnes & Noble, and Kobo.  MARIAN20 is the coupon code for 20% off in my Payhip store..

The Last Season, the Story of a Marriage is also available in paperback at Barnes & Noble and can be ordered from bookstores all over the world.

Reviewed By Tracy A. Fischer for Readers’ Favorite

We all know them. Those established couples, the ones who’ve been together through thick and thin, who have been married for years, and no one could imagine them not together, the couples that other people aspire to be. Such is the case with the marriage of Buddy and Ginger Middleton, the main characters in The Last Season, The Story of a Marriage by Marian D. Schwartz. High school sweethearts who’ve been married for twenty-seven years, their marriage is a stable one, a good one. But when Ginger is offered a job by the wealthy and debonair Avery Laird, and Buddy has reservations about Laird’s true intentions and tries to convince her that she won’t be adequate for the task, things begin to crumble in the Middleton marriage. Will Buddy and Ginger be able to make it back to their former selves, into the relationship they once found so comfortable and supportive? Do they really want to?

The Last Season, The Story of a Marriage is a wonderful inside look at a faltering marriage, one in which the couple involved began to take each other and their love for granted. Author Marian D. Schwartz is skilled at developing characters that the reader truly cares about, and I found that to be very much the case with Buddy and Ginger. This book would appeal to any reader who loves great fiction, romance, and stories about relationships, flawed though they may be. The only suggestion I would have for a reader would be to make sure you have enough time set aside to read it from start to finish, because once you pick it up, you won’t want to put it down until the very end.