I have gone back to that night, studied the seconds of every minute like a jeweler examining the facets in a gemstone, and found nothing, not a clue.

It was a Thursday like any Thursday. You came home at six thirty. We had dinner with the children—roast beef, baked potato, salad, and ice cream. After dinner, they watched television. You went upstairs to your study. I gave the children their baths and put them to bed. You went to their rooms to say good night, looking preoccupied.

It was not unusual. You generally wore that look when you came out of your study. We had no social plans for the evening, no meetings or parties. You went back to your study. I took a bath. You were still in your study. I put on a robe, checked my calendar for Friday, and went downstairs. It was ten o’clock. I picked up some needlepoint and turned on the television. A commercial for trash bags was on the air. I remembered that you hadn’t taken out the garbage. I went back upstairs and knocked on the door of your study. You didn’t ask me to come in. Again, nothing unusual. “Tomorrow is garbage day,” I said, trying to speak loud enough to penetrate the door without waking the children. “The garbage in the kitchen needs emptying, too.” I heard your chair swivel. “I’ll take care of it,” you said. I returned to the family room. You came down an hour later with some papers in your hand. The eleven o’clock news was just beginning. You picked up the trash container in the kitchen, which was the only unusual thing about that evening. You generally emptied the garbage after dinner. Garbage in the house offended you.

“I’m going to bed now,” I said, turning the television off.

“I’ll take care of the garbage,” you replied.

I went upstairs, checked on the children, brushed my teeth, and set the alarm. I was in bed with the light out at eleven fifteen. You were still in the garage.

I must have fallen asleep immediately. I rolled over at one o’clock and realized you weren’t there. You had been having difficulty sleeping, so your absence wasn’t unexpected. Some nights you would go to bed, lie still at first, then toss for a while, moving your legs as though they were painfully cramped, and finally get up. You had always been a heavy sleeper, able to block out the children’s cries at night, thunderstorms, even my first attempts to awaken you when my labor pains were coming eight minutes apart with Catherine. The insomnia came suddenly, like a bad cold, a few years before your death. We had argued about it. I wanted you to go to Barney Leadman for a checkup. You refused. I insisted. You said it was your insomnia, not mine, and you had no intention of discussing it with Barney. I didn’t understand, then. It was another argument to add to the neat stack we were accumulating like a pile of canceled checks. Today I understand the insomnia, if nothing else.

I couldn’t fall back to sleep. I wish I could say it was intuition, or some kind of premonition, but that wouldn’t be true. I was trying to decide upon an outfit to wear to the Foxes’ cocktail party Friday night. I had narrowed it down to the blue or the black. Your life had already been extinguished, and I was lying in bed debating the relative merits of dresses versus pants.

By two o’clock, I had mentally cleaned my closet without making a decision. The blue and the black no longer appealed to me. I got out of bed and checked on the children. When I looked in your study and you weren’t there, I went downstairs. There was a hum, the noise of a running engine. It was coming from the garage. I opened the door and found you. You had taken care of the garbage first.

Click the Payhip button to get Realities, which is easy to download for ALL ereaders. The Payhip coupon code for 25% off is MARIAN25.

Realities is available on Barnes & Noble, Kobo, and Apple for $4.99.

Realities is also available in paperback at Walmart, Barnes & Noble and bookstores all over the world. 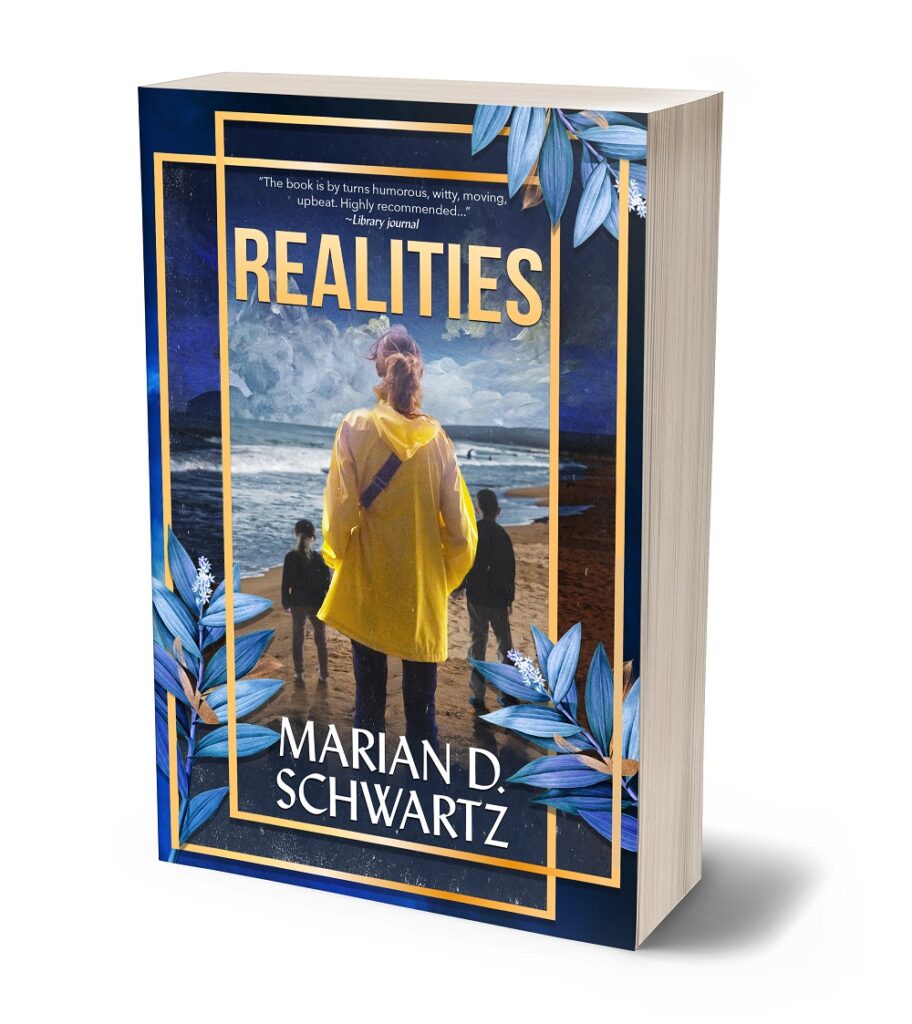