Home » Blog » Writers’ Conferences: An Investment or a Waste of Money?
Previous

Some writers attend conferences because they are looking for more than creative writing workshops and advice on marketing. Thousands of aspiring writers are attending writers’ conferences in the desperate hope they will connect with a literary agent who will get them contracts with traditional publishers.

Any aspiring writer who has tried to get an agent knows how difficult it is. Some agents claim to get two thousand query letters a week from unpublished writers seeking representation. The odds against these writers are staggering, so it’s understandable that they keep writers’ conferences filled.

Hopeful writers are lured into the conferences by the promise of contact with agents and editors. Many conferences get well-known agents to attend by paying for their plane tickets, hotel rooms, and meals, but this doesn’t mean that the agents are interested in acquiring new clients. The Southern California Writers’ Conference is candid about this problem. On their website there is a note to agents telling them that they can contact the conference if they are accepting new clients. The note, which sums up the problem, states: “There are plenty of other conferences that provide reps who have no sincere intent of acquiring new clients with free weekends at nice hotels in desirable locations. The SCWC is not one of them.”

The SCWC’s candor is refreshing. The conference I attended years ago still promises agents and editors, but they are very careful in how they phrase it and with good reason: it’s doubtful that more than a few writers out of thousands who have attended have gotten an agent there.

Some conference websites prominently display testimonials from writers who found agents and got book contracts, but for what percentage does this actually happen?  One percent? Five percent? Ten percent? Not one of the conferences that I am aware of offers this statistic, and some of the testimonials on their websites are ten years old.

It is impossible to know how many of these success stories are the direct result of attending a conference. What happened to me raises this question. I had just gotten an agent when I went to the writers’ conference I attended, and my novel Realities was accepted by a publisher a month later. Several months after it was accepted I received a letter from the conference wanting to know if there was any news about my novel. I didn’t respond. The advice I had gotten at the conference—that I should change the novel from the first person to the third person—would have ruined the book. It didn’t seem right that I should let the conference take credit for the book’s acceptance.

Although the Algonkian New York Pitch conference offers no statistics, its rigorous vetting process and a program designed to help writers get their manuscripts ready for publication seems to offer the most hope for success in getting an agent. But it should be noted that the sixty writers who are accepted for the conference must have worthy manuscripts that are judged either ready for publication or close.

Pitching at conferences has become big. Some pitches are called “agent consultations” and are sold out months in advance. Writers pay forty dollars and up for a chance to pitch their novels to agents for ten minutes or less (one conference limits pitches to ninety seconds). The writers are nervous and understandably so: imagine standing in a line of twenty people or more, waiting for your turn to tell an agent why he or she should want to represent you.

Agents may tell the writers who pitched to them to send them their manuscripts, which is easier than telling someone face-to-face that they aren’t interested. The writers think they have an edge, but the truth is that their manuscripts end up in the slush pile with everyone else’s. Occasionally writers have successful pitches that get them agents, but it doesn’t happen often. Pitching seems to be more profitable for the conferences than it is for the writers who are paying to participate.

The price tags for most writers’ conferences are high. Now due to the pandemic many writing conferences are online, which lowers the cost.  Traveling and living expenses can add up quickly, especially when paying for hotel rooms and meals. But if you attend a conference online, you miss what some consider the most valuable part of going to a conference: meeting other writers who may become lifelong friends.

There isn’t an easy answer as to whether creative writers’ conferences are an investment or a waste of money. I honestly don’t know. But if I were considering attending a writers’ conference, I would think hard about why I wanted to go and what I expected to get out of it. Then I would shop very, very carefully.

My aim in writing The Writers’ Conference: A Novel was to create a fast, entertaining read that would shed light on the closeted world of publishing.

Click on the link to find out more: https://mariandschwartz.com/writers-conference-ebook/ 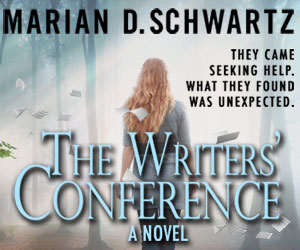 “Some conferences are more respectable than others. All are there to take your cash.In The Writers’ Conference, Marian D. Schwartz tackles the topic with glee, laying bare the underbelly of one such event. .. a fun read for everyone, and a useful education for anyone who might be thinking of a writing career. The story moves along quickly and holds the reader’s interest all the way to the exciting (and surprising) ending.”  Peter C. Foster, author